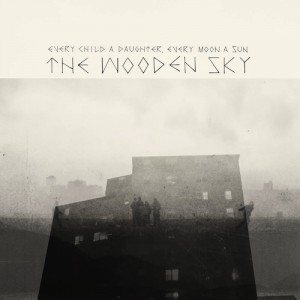 Every once in a while a perfect album is born. It’s parents: poetic lovers, stripped of beating hearts and broken down to nothing more or less than flesh and bones, so exposed. When I reviewed the Wooden Sky’s teaser City Of Light EP, I said the songs were destined for wine and tear-soaked nights alone in the city. It felt a painful level of sad, which it was, but when songs are pulled and compiled into the full collection that is Every Child A Daughter, Every Moon A Sun suddenly the true picture unfolds.

The album starts with “Child of the Valley,” a track that opens up the pages to the story and puts everything into perspective. Spawned perhaps by the greatest loss of all, ourselves, that poignant and painful realization that we are nothing at all. It folds into City of Light’s standout “Angelina” and moves and bends through a series of songs documenting a man, a city, a generation broken and found piece by piece.

What is it about this band that resonates with me so true? There are an uncounted number of talented bands in this city, but nothing seeps into my blood the way Gavin Gardiner’s words do – the way the whole band does. The way the sad, alt-country makes me feel so understood and somehow alive. Would I love this album just as much if I weren’t depressed? Would I listen to it as intently if the words didn’t pain me so, if I was anything less or more than flesh and bones myself?

When you’re a music journalist, albums land on your lap and you’re supposed to write how you feel about them before they have time to sink in. Sometimes you have to grow with the songs, you have to have that moment where you put the album on and suddenly everything feels all right, like the world is suddenly clearer. And any album that inspires this level of connection, this pure true trace of brilliance is exceptional beyond stars and ratings because it becomes part of you and nothing can take that away. I received this album weeks ago and I only love it more and more.

“Sometimes it gets so dark, I wonder how I’ll find a way” Gardiner sings in “Dancing Out My Window” and it’s as if he’s stealing my own thoughts and putting them into words so pretty and right. There is no sense in denying this album to be the soundtrack to depression – and I was perhaps merely in denial when I reviewed the EP. It’s easy to deny depression especially when it owns you as much as you own it, which is the same reason why sometimes I love Bon Iver and sometimes I hate Bon Iver because no one wants to cry all the time just like no one wants to talk about it.

Initially I didn’t want to admit this about the Wooden Sky because I liked the rolling slightly bouncy sounds of their earlier releases, but the band shines in the development and progression of their writing, even at the expense of sadness and the exposure of their souls. Some parts have been stripped to the bare bones of plucked guitar strings in “Malibu Rum” and “The Night Goes On and On” yet they maintain a level of complexity that comes with knowing how to construct emotion and tell a story through song. To create something that resonates with and moves an audience is to become a master of your craft, to find your niche and maybe even, somehow along the way, yourself.

The issues here are not light, and aside from sadness there are also themes of love, forgiveness and death. “Your Fight Will Not Be Long” is a pulling, heart-breaking track that references Saint Peter, an Apostle said to have been crucified with the cross inverted for he felt he was not worthy enough to die like Jesus.

This album dropped at the end of February, the saddest month of all, but it is a shining light, a welcome collection, an image of hope and life and fire in and of its self. What the Wooden Sky has created is a delicate mirror that asks its audience to put down their pride, accept themselves and get lost in the feeling. To sway and move, and to be swayed and moved. This is simply a brilliant, brilliant complicated memoir of a release. Stripped, exposed, perfect.