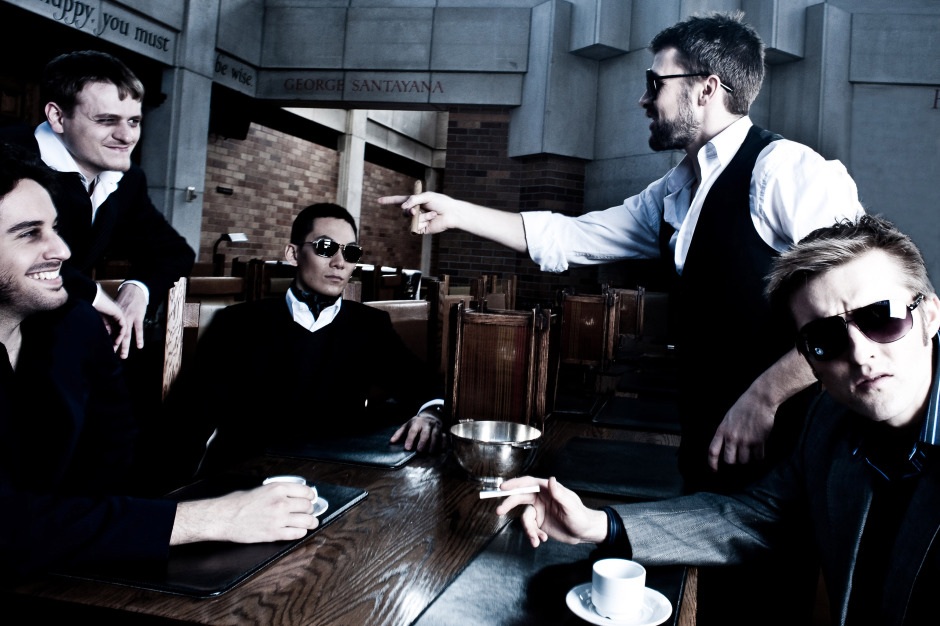 It was a struggle dragging our tired, hungover bodies to Tattoo Rock Parlour for one last night of rock’n’roll, but worth every sleepy drunk yawn when champion performers Tiny Danza took the stage. Crowned the kings of Indie Week 2011 (or what we like to call the Queen St. W Battle of the Bands), Toronto’s own TD won the judges over with their bluesy fusion of hip hop and jazz. The energetic group wrecked dance havoc on the stage and helped pave the way for the resurgence of layered, dramatic soul with dynamite pop sensibilities. These fly guys pair style and pizazz with likely classical training and Kanye West attitude. This is what turns heads people – check these guys out ASAP!

We were fortunate to catch second place winners The Ascot Royals twice this week. A mesh of catchy contemporary influences and heavy hearts, these guys are fuzzy balls of energy mouthing clever words to Steeltown rhythms and wailing garage rock guitars. Front man Jimmy Chaveau is a notably snazzy dresser with big poofy hair and swanky stage moves. Check out “Zap Zap” to get a feel of the sometimes Franz Ferdinand vibes these guys amp out.  Third place went to Calgary’s Zoo Lion whose Metallica-style rock’n’roll was solid enough to land them in the top, but not original enough to extend them past bronze.

Two-time Indie Week finalists Courage My Love also didn’t walk away empty handed. While their energetic sets, Paramore-esque tracks and punk rock ethos are undeniable, there’s likely too much paperwork involved in shipping 17-year-olds off to Ireland. Instead, vocalist and guitarist Mercedes Arn-Horn was awarded a limited edition Epiphone 1961 SG for mean shredding (and I mean serious mean shredding!). Along with her twin sister Phoenix on drums and rounded out by David Blake-Dickson on guitar, this band continues to turn heads for their on-stage excitement and fervor. We saw them last year and their set has only gotten tighter. Keep it up!

Indie Week Highlights
Week-long music festivals tend to get a little hazy, but here’s what we remember:

Last year’s Indie Week winners These Electric Lives gave everyone a reminder of what it takes to win his festival.  TEL’s live show is an unstoppable force of energy and catchy dance rock tunes that left the packed house at Hideout wanting more.  Highlights included “We Won’t Call This Home” and a sensational cover of Chris Isaak’s “Wicked Game” that turned into an upbeat disco-esque track.  When they finally left the stage, most of the audience left with them, proving that TEL were one of the top bands of the night to see.  With an Indie Week win under their belts and a new album in the works, it will be interesting to see what 2012 brings this gifted band. (TJ Liebgott)

Last year’s Indie Week finalists A Primitive Evolution are just putting the finishing touches on their anticipated acoustic album, so it was only fair The Great Hall be treated to electric versions of a some of those tracks. While maintaining the cult vibes and energy, A Primitive Evolution is branching out in a (dare we say it!) more accessible direction, shedding some of the ambiguity and perhaps anger in favour of more measurable courses. The drums are still heavy, the girl/guy melodies still burn bold during bridges, but that wild roughness, that misguided dissatisfaction with humanity, and that gritty essence that really gets under our nails is slowly weaning. The performance itself was dynamite. If anyone in Toronto knows how to take advantage of a stage its these guys. A feral, unmatched energy that rips through the air and into the night, taking the crowd along with it, and voiding them of conventional salvation. A Primitive Evolution still gives unmatched performances, and despite a week of shows, theirs remains a tough act to beat.

This off-shoot Indie Week performance doubled as a CD release party for The Birthday Massacre’s latest EP Imaginary Monsters. Dramatic smoke and haunting guitars were initially interrupted by tech troubles, but the animated crowd roared and TBM burst onto the stage with an animalistic energy and an almost total disregard of the difficulties. They quickly tore into crowd pleaser track of the same name “The Birthday Massacre,” and later the new tracks oozed through dark guitars and creepy, catchy synths.  The Great Hall with its vintage ambiance and theatrics (and finally a new bar!) proved an ideal setting for Halloween-esque tunes that kind of made the place feel haunted. The decently packed performance turned out to be an all-ages show, but very few underagers were in attendance.

Montreal songstress Liz Skalak performed big pop songs to a small crowd at the recently-renovated Annex Wreckroom. Her performance was incredibly powerful and strong, hiding dark undertones behind melodic and catchy modern pop tracks with country influences. Her final track “Devil in Disguise” as co-written by her producer only further solidified our high praise of this up and coming star. She has a little bit of edge that makes her intriguing. She told us she sang backup for Miley Cyrus and frankly we’re not surprised. Liz Skalak is proof pop doesn’t have to be all sticky sweet to get stuck in your head!

It takes a lot of guts to full on rock out in a skin tight vinyl one piece backed by a slew of Lady Gaga-esque dancers and space odyssey multi-instrumentalist Oompa Loompas – but that is exactly what Seattle’s Super Geek League brought to Velvet. The self-proclaimed soul metal band is comprised of nine members who each demand attention and cascade energy across the platform from in-your-face bass to a slew of eclectic influences. They’re so captivating you can’t look away. Trust me, I tried, but the stage show was so full of surprises I almost let the ice in my empty J&C melt into oblivion. Not entirely hellbent on the music, but the performance alone is worth it and the songs are decently catchy. This band is unlike anything we’ve seen before. They tend to trek up here for music festivals, so keep your eye out and bring a camera!

By the time we snaked over to the Bovine, Toronto’s CJ Sleez was already tearing up the place with her smoker riot-grrl vocals and unapologetic aptitude for causing a scene. This entire band was made for the Bovine crowd: killer guitar solos torn from pages of the Sunset Strip manuscript – a land where tight pants, in-your-face attitude and sex kitten vibes are not only wildly encouraged, but welcomed with a finger-nails-dragging-down-your-spine ferocity. CJ Sleez is a perfect scorpion of raunchy rock’n’roll fronted by a rock-savvy blonde whose as fierce as she is feline. Fave CJ Sleez tracks include “Dirty Girl” and “Backdoor Tease,” but this performance mostly featured tracks off this year’s Valley of the Shadow. If you have yet to experience the ‘Sleez you must! It’s as if your dusty vinyls came to life!

Not gonna lie, we had a blast watching BC mountain imports The Unknown Culprits treat the ‘Shoe to some small town rock’n’roll. These guys are old school, singing tracks literally about getting laid and drunk, two unsurprising characteristics for a band that opens with a song called “Whiskey” and is sober enough to sing it. These guys had authentically hilarious stage banter and their energy was intense despite having just wrapped a Canadian tour. If they didn’t sleep, you couldn’t tell for they were ripped on wild adrenaline and gave every track 100 per cent. These guys just relocated to Toronto so we’ll be seeing more of them with multiple dates across the city in late Oct/early November.

Australia’s soulful singer Marta shut Indie Week down with haunting rolling songs of delicate, beautiful ballads laced with a tiny tint of dark country edge. Backed by a full band and a gorgeous array of instruments, Marta wowed the crowd with songs off her newly released debut EP Rebel Baby. Rebel Baby itself was recorded in Toronto and features backing vocals from Justin Rutledge and harmonica by Jerome Godboo. While her emotional music resonates deep within, it did not possess the energy and excitement Indie Week clearly expects from its winners. That said, Marta’s performance was truly captivating.